As a councillor, I now have access to electronic copies of meeting minutes and agendas – and will endeavour to get them posted as soon as they become available.  You can find these under the Staverton Parish Council heading in the left menu bar.

Devon County Council have a great webpage which allows you to report problems to DCC highways department by clicking on a map.  You can also track a previously reported problem to see what status the repair is at.

This page covers the following categories of issue:

Would you like to receive fresh, organic produce grown at your local community farm? 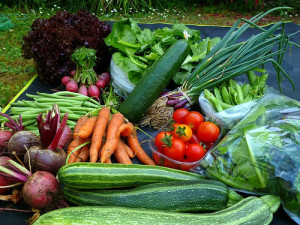 School Farm Community Supported Agriculture (CSA) is now open to new members. School Farm CSA is a unique organic market garden run by four women growers on the Dartington Estate. For the past two years we have been supplying our local community with fresh, organic, local produce and this year we will be doubling our food production, meaning we can open our gates to new members.

CSA members get an array of seasonal, freshly picked produce, whilst supporting ecological farming practices and local livelihoods. A share of the produce contains a range of freshly harvested vegetables and some fruit (roughly 5-10 items per week). A share is designed to feed a household of two adults per week, or a larger family that don’t cook every day.

Members also receive a monthly CSA newsletter with recipes and farm updates, and are invited to attend events, volunteer days and courses at the farm. We aim to supply a weekly box of vegetables from June through to January, weather permitting. You can pick up your vegetables in Totnes, Bridgetown or on the Dartington Hall Estate. Cost of a share for the full 2015/2016 season is £500, with monthly payment plans and subsidised shares available.

In December Staverton parishioners came together to stop the sale of the wildlife area out of parish ownership and also to enable the purchase of the allotment field in Landscove. There was a tight time schedule to achieve this but thanks to the co-operative efforts of a group of parishioners Staverton and the general support of parishioners the Wildlife Conservation Society was established as a community benefit and the sale was successfully completed.

At the short ceremony Spencer Keys who, as a parish councillor in 1992 was instrumental in the initial purchase of the area, said a few words about the history of the area. He also told the audience that 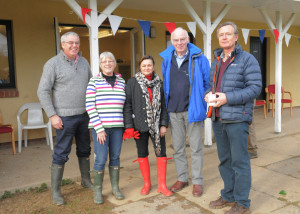 it comprises a steep slope of about two acres running down from the Staverton playing field towards the River Dart at the bottom of which is a rare form of woodland marsh habitat which floods in winter and dries out in summer. 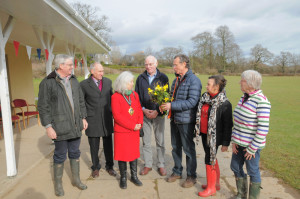 Bruce Thorogood, Chairman of the SWCS, thanked all those who had helped in any way to bring this project to a successful conclusion and explained that the area would now be held in trust for the local community in perpetuity. He also thanked Raymond Hayes, Chairman of Bartons Solicitors, who offered his legal skill pro bono.

After Councilllor IanCatherall had spoken on behalf of Staverton Parish Council, Jacqi Hodgson cut the ribbon to the Boardwalk area of the Reserve. She was thanked for her attendance and presented with a posy of spring flowers.

Tea and cakes were enjoyed by all present. 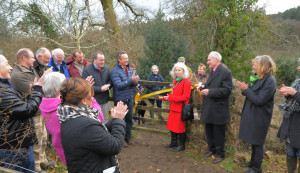